Ahead of #AllIn2019: A history of the area around Victoria

Community Foundations of Canada May 29, 2019

Vancouver Island is home to 53 First Nations which equates to almost 20% of provincial First Nations and about 6% of the national total.  Among these Nations, there are three main language groups: Coast Salish, Nuu-chah-nulth and Kwakwaka’wakw.

The Capital Regional District (CRD) is a complex region that spans the traditional territories of over 20 First Nations, of which 11 have Reserve lands and 9 of those are populated (see map). Populated reserves include the Coast Salish Nations of Esquimalt, Songhees, Pauquachin, Tseycum, Tsawout, Tsartlip, Scia’new, and T’souke, and one Nuu-chah-Nulth First Nations band Pacheedaht.

Victoria the city is western Canada’s second oldest city, incorporated on August 2, 1862. However, since time immemorial the territory has been home of the Lekwungen People, a subset of the Coast Salish who are also known today as the Esquimalt and Songhees Nations. Lekwungen is the original language of Victoria, and the traditional culture that has been here for thousands of years; a culture based on careful land management including controlled burnings and food cultivation.

First Nations peoples have called Victoria’s inner harbour their home for thousands of years. With its temperate climate, natural harbours and rich resources, Victoria thrived as a trading centre for a diversity of First Peoples, weaving a complex history of land use for the Lekwungen territory. Throughout these centuries, the First Nations peoples treasured the harbours naturally calm waters and enjoyed the abundance of edible berries, crab-apples, and camas roots. They honoured the spirit of the land that provided food, shelter, clothing, and transportation, and lived in balanced harmony with the resources despite a large population.  The Esquimalt and Songhees peoples called the area Lewammen or “the land of the Winds” due to winter windstorms.

In 1778, Captain James Cook is the first known European to set foot on what is now British Columbia, long after eastern Canada had seen exploration and even settlement.  Gradual interest had grown in the territory west of the mountains as fur trade companies pushed towards the Pacific Coast. Trading is what compelled the Hudson’s Bay Company to select what is now Victoria harbour as the chosen site for their Pacific Northwest base, building the trading post and fort at the location the Lekwungen People called “camosack” meaning “rush of water”.  Victoria became the gateway for trade with the First Nations as there was a high demand in Europe for the valuable natural resources such as fur, salmon, and trees.

The ongoing development of the capital city led to profound disruption of the traditional economy and livelihood of the First Nations.  In 1906, a causeway was built across the mouth of Whosaykum or “muddy place”, also known as James Bay, a place where First Nations harvested crabs.  Once blocked, the “muddy place” was filled in, eliminating a valuable food source for the First Nations. Two years later the Empress Hotel sank its foundations deep into the buried Whosaykum and the hotel remains open on that site to this day.

Also, around this time disruptive technologies such as muskets and alcohol were introduced into the lives of the local Nations, dislodging many from traditional pursuits of economy and inevitably making them dependant on the Fort Victoria Indian Store, and so many of the Songhees people lived directly beside Fort.  Fear of fire from growing population led the HBC to require the Songhees to move across the harbour to today’s Songhees Point, displacing them from their traditional village site and then ultimately moving them to their current reserve.

But despite these struggles, First Nations endured and the Songhees and Esquimalt Nations are now experiencing a flourish of revitalization of traditional culture, language and community.

This article is part of a series produced for #AllIn2019 by our partners at the Victoria Native Friendship Centre. The author is Kerri Amsing a recent graduate from Royal Roads University who holds a degree in Justice Studies. Kerri’s passion to travel led her to explore the west coast of British Columbia. Falling in love with the Island, she moved from her home town in Alberta with her German Shepherd and has been grateful to spend the last two years on the territory of the Lekwungen speaking Peoples. Kerri is the newest addition to the Victoria Native Friendship Centre’s team and was a vital player in the research and development of these articles for CFC. 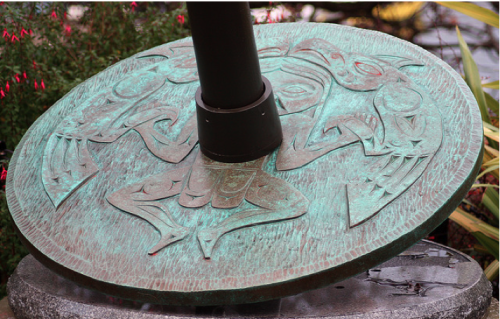 Relentlessly pursuing a future where everyone belongs